Red Sand Beach, or Kaihalulu Beach in Hawaiian, a dramatic and beautiful hidden cove in any language!

In a nutshell: A dramatic and beautiful hidden cove unlike any other.
Minuses: The short hike to the beach is hazardous.
Sound-bite: “Has the Mothership departed without me?”

WARNING:
Part of the trail was lost to a landslide and has become more dangerous than it once was. This is not a safe hike for anyone unaccustomed to navigating cliff-edges with slippery/unsound footing.

DETAILS:
Red Sand Beach is a dramatic and beautiful hidden cove unlike any other. The ocean outside the cove is almost always a deep, almost surreal Kool-Aid blue, and rages relentlessly against the dramatic and rugged coastline.

The crescent-shaped beach is cut deep into the Ka’uiki Head cinder cone, whose rust-red lava cinder cliffs supply the beach with its red sand. These cliffs of loose crumbly cinders tower almost vertically, yet somehow remain intact to impressive heights.

The cove is protected on the ocean side by a wall of jagged black lava rock, further contributing to this almost otherworldly scene. 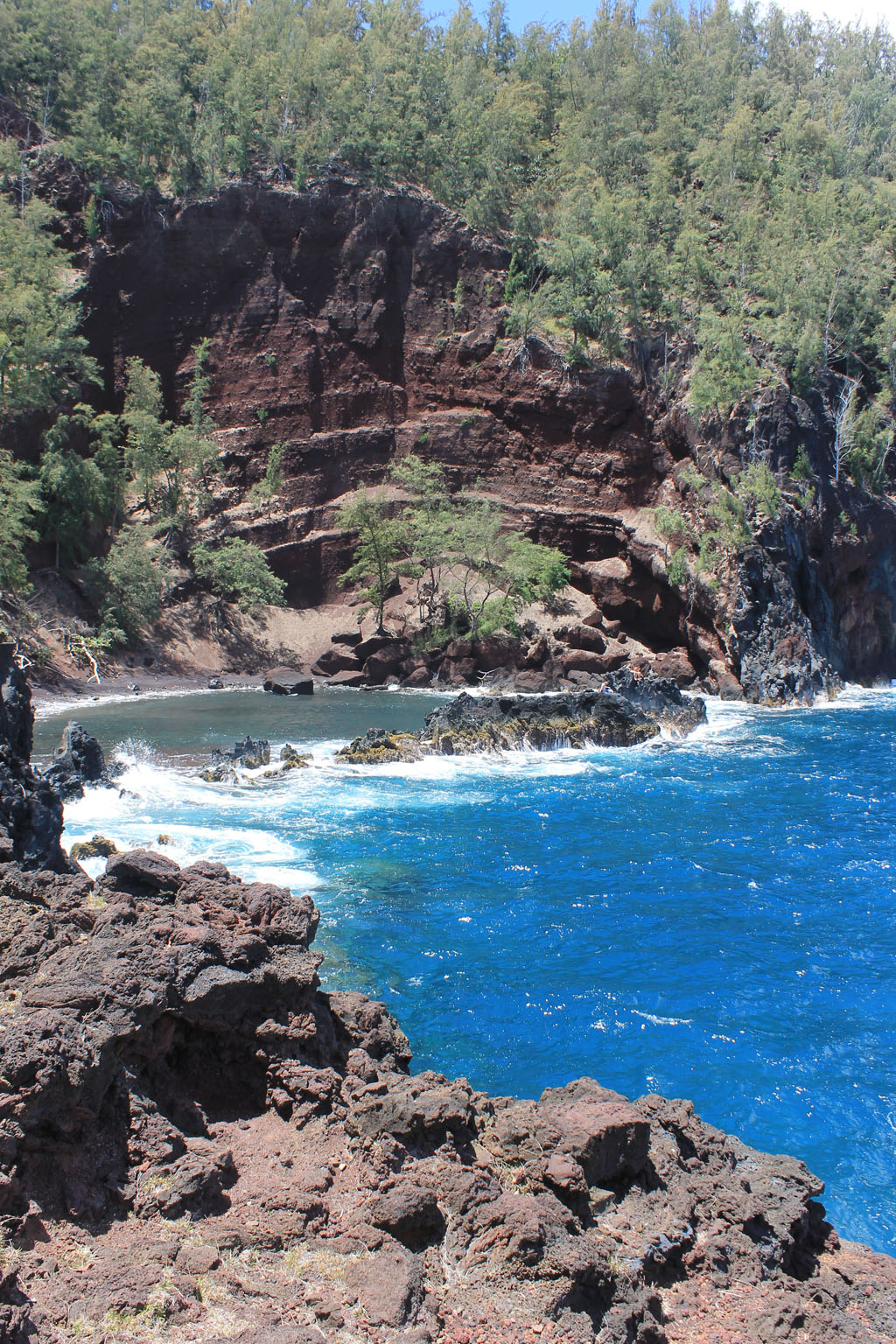 View from the trail as you approach the cove. (and no, it is not photoshopped…)

While you are here you’ll likely see 'iwa and Koae Kea as they ply the sky above the cliffs looking for prey below. Both birds are impressive to watch. The Iwa are significant birds and masters of wind currents, and in this out-of-this-world setting look like pterodactyls cruising over a prehistoric sky. Koae Kea are of a lighter and more peaceful appearance – looking almost like white doves with a long streamer for a tail.

The icing on the surreality cake are the nudists and eccentric characters who also frequent this beach. Strike up a conversation with one of these folks and it is certain to add more color to your experience.

Speaking of eccentrics, if you are among the chosen few awaiting the Mothership, local hippie lore has whispered in my ear that this is where she will pick up her children. In fact, once a guy told me that he believes the Mothership resides just below the sands of this beach, waiting for the preordained moment to lift up above the surface and take off. Far out, man.

Ka ‘uiki Head is also an important cultural site being the birthplace of Queen Ka’ahumanu, and site of historic battles and an ancient Heiau.

Back on Earth, when you’re following the portion of the trail that bypasses the slide, and are down on the shoreline, take a look around. You will notice some large pieces of old grave markers from the Japanese cemetery above are down here. Now notice the landslide that erased part of the original trail, and how the cemetery is slowly being removed to erosion. I’ve never seen more than a marker down here, but I do know gravity doesn’t pick and choose what falls. Yikes!

I ranked it lower than five stars for two reasons: First, because I don’t want everyone who reads this site mindlessly going here – a crowd really does ruin the vibe here. Also, getting here can be quite dangerous for those who are not sure-footed enough to recover from inevitable a cliff-edge slips on the loose cinders. Please take the warning seriously and don’t make the wrong kind of vacation memories. 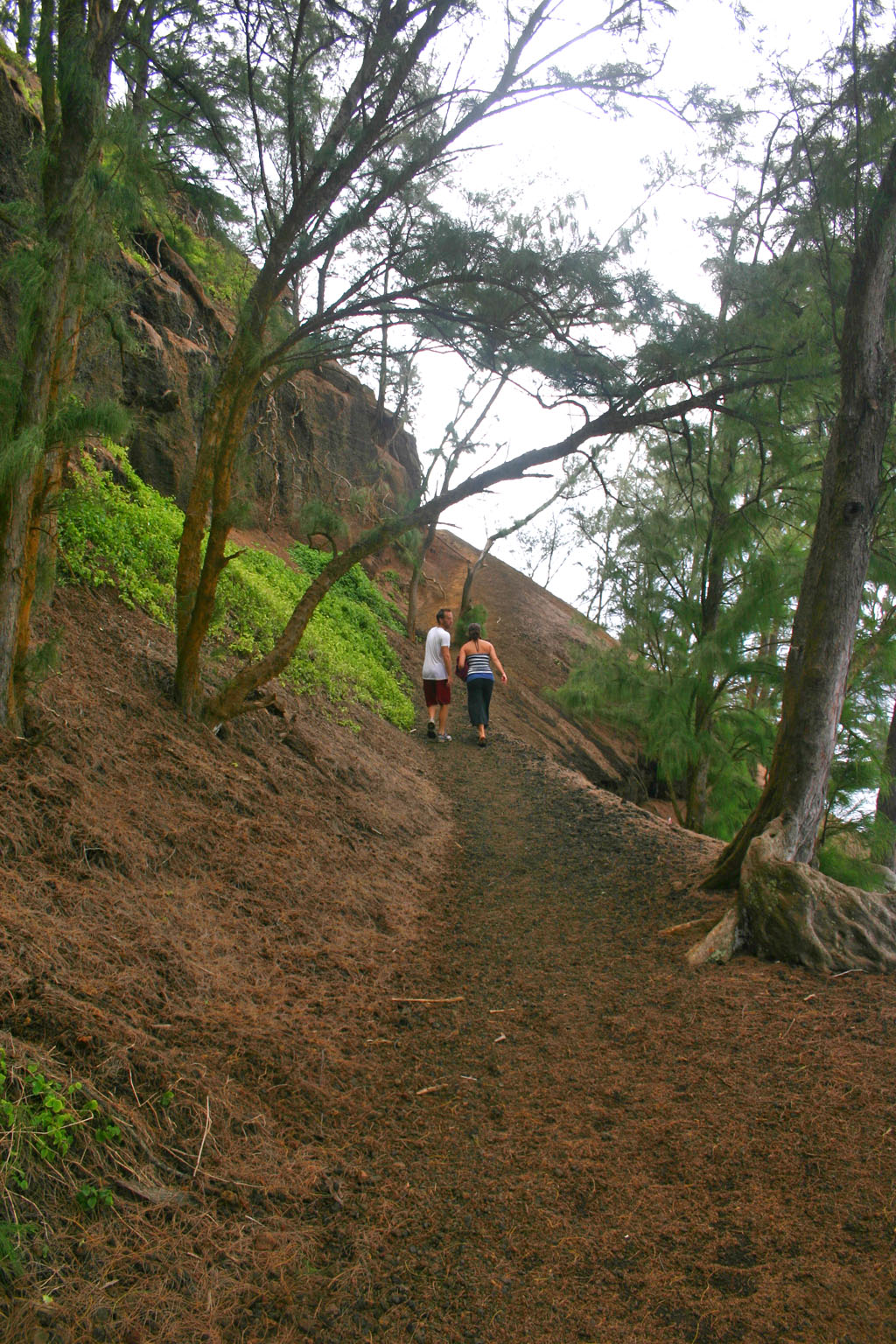 A couple makes their way up to the first view of the beach.

How To Find Red Sand Beach:
To get to this beach can be tricky; use the Google Map below, with the following notes:
1. Park on the side of the road just outside of the Travasa Hotel parking lot. You will walk across the Hana Community Center field looking for a trail on your right hand side. Recently the trail has been well-cleared (by far the most I’ve seen in well over a decade) and is now very easy to find. (The jungle grows quickly, so this could change!)
2. If you end up at the Japanese Cemetery, you need to back-track to one of the paths that go downhill. (I would definitely not take the suggestion of other guidebooks and use that trail right next to the cemetery any longer.)
3. The original ridge trail has been partially erased by a landslide, and a new narrow and more dangerous trail has replaced it. There is another trail that takes you down to the shoreline which is safer, walk along the shoreline and then climb back up to the trail beyond the narrow/slide section.
4. The trail is made of loose cinders and covered with ironwood pine needles. It is slippery, and there are several points where a slip could result in catastrophe. That said, the trail is short, so opportunities to tempt fate are short in duration; fairly experienced hikers may find these risky points somewhat trivial. Inexperienced/unlucky could be severely injured or worse.

Key Info:
Location: Park at the end of Uakea Rd. which runs on the ocean side of Hotel Hana Maui, parallel to Hana Hwy.
GPS Coordinates: 20.752803,-155.981736
Facilities: Mothership*
Get directions