'Ahihi Bay's Waiala Cove is an excellent place for beginner to intermediate snorkelers, diving and kayaking.

In a nutshell: ‘Ahihi Bay’s Waiala Cove is an excellent place for beginner to intermediate snorkelers, diving and kayaking.
Minuses: Rocky & no sand.
Sound-bite: “Please don’t stand up!”

DETAILS:
Typically called ‘Ahihi Bay (or even Ahi Bay by mistaken visitors), Waiala Cove is a small semi-protected cove of the overall much larger ‘Ahihi Bay. It is popular since it’s a convenient place for snorkelers to get in the water without hiking or swimming. For folks venturing away from the immediate entry area of the cove, larger coral formations and the more diverse populations of life they support begin revealing themselves. SCUBA and kayaking are also popular here. Parking options are very limited, and since the narrow road abuts the end of the cove, it doesn’t take many people showing up for a snorkel before it begins to feel over-crowded. 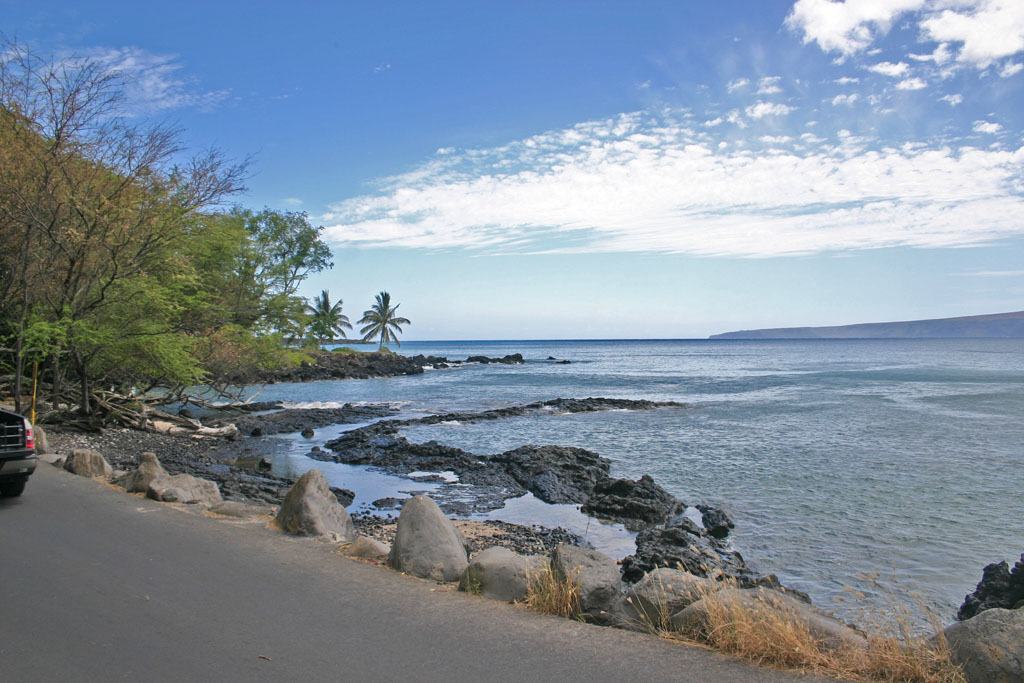 Waiala Cove itself is shallow, and entirely made from large lava rocks often covered with spiny sea urchins. The shallowness of the cove is a main attraction but also poses the main hazard – especially during times when the ocean is particularly rough or waves are coming directly into the cove. Since snorkelers are floating, they’re largely at the mercy of the water level and wave action – rough seas here mean you’re getting up-close and personal with shallow or partially submerged boulders. Snorkelers should avoid this cove in rough conditions.

During normal ocean conditions, more experienced snorkelers, swimmers and kayakers can venture out of the cove and into ‘Ahihi Bay (proper) where it remains shallow and is teeming with life. Within 100′ of shore, depths rarely become deeper than 15′. Stronger swimmers, SCUBA divers and kayakers may choose to make their way even further out into the bay where average depths are 25′-35’. Snorkeling to the south (left) is where you will find the best coral formations. There are also caves and trenches close to shore. Besides all the fish, as you proceed further you’re also likely to encounter everyone’s favorite, the Honu (green sea turtle) and equally impressive eagle rays. 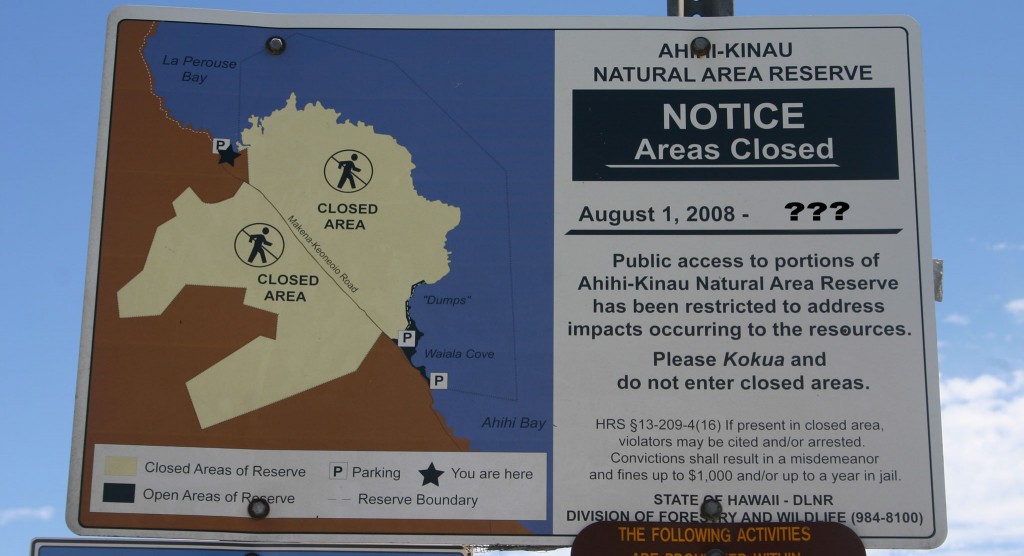 Waiala Cove is part of the ‘Ahihi-Kiana’u Reserve, and one of the only parts of the reserve that is still open to the public. Careless descriptions in guidebooks along with some less than environmentally sound kayak tour companies literally trampled this fragile reserve ecosystem down. Areas like Mokuha (aka “Fishbowl”) and Kalaeloa (aka “Aquarium”) became an unsustainable draw for people after being publicized and commercially exploited. Years ago commercial kayak tours were banned in the hopes that it would move the impact toward sustainability. But do-it-yourself hikers and kayakers filled the void, and since self-guided visitors are typically not as informed as those being guided, the unintended consequence was less informed visitors.

In 2008 the decision was made to close off almost the entire reserve to the public for two years while a better way to manage the reserve was determined. That decision has been repeatedly two years at a time. This portion of ‘Ahihi Bay was chosen to be the only popular snorkel spot in the reserve where land-access would remain open. (To visit the other ocean portions of the reserve means you must access via non-powered boat or by swimming.)

It is very important to note that while virtually all guidebooks offer suggestions of places to enter the water from the rocks, the only place anyone should ever enter at Waiala Cove is via the concrete slab on the North end of the cove. Not only is it the easiest and safest way in, entering from other areas has impacted coral significantly. A volunteer group of concerned naturalists partnered with the State and other environmental groups had been educating visitors about this (and other sustainable practices), but the group’s presence at ‘Ahihi-Kiana’u has since been suspended pending the State’s study on more effective solutions.

Learn to adjust masks and clear snorkels without standing before you go out over shallow reef. Do your very, very best to never stand while snorkeling. “Just one time” might not sound like a lot, but one step kills many years of coral growth instantly.

Important information for beginner snorkelers:
An initial State-sponsored study suggested that beginning snorkelers be told to avoid this area because they’re more apt to make unintentional but common errors which impact the environment and can even be dangerous to themselves. This suggestion is somewhat controversial, because, while this is true, it has also been shown that the vast majority of visitors respect our ecosystems in Hawaii when they’ve been educated on their impacts and how to minimize them.

Key Info:
Location: Makena-Keoneoio Rd.* (5.3 Mi S. of Grand Wailea Resort) – * Note: different maps refer to this road by various different names, usually containing the word “Makena” – they are all the same (and only) road through this area.
GPS Coordinates: 20.618205,-156.437201
Facilities: None
Get directions