In a nutshell: Kama’ole is a very popular set of beaches for locals and visitors. Beautiful, long, 1.5 mile sandy beaches with incredible views of Molokini, Kaho’olawe and Lana’i islands. Kam III has one of the most regular South Maui shorebreaks for boogie-boarding. Snorkeling opportunities are plentiful. Full facilities and family friendly.
Minuses: Kam III is crowded on weekends and holidays and sometimes less-than-desirable types make the grassy areas a drinking hangout.
Sound-bite: “The best beaches in Kihei, hands-down.” 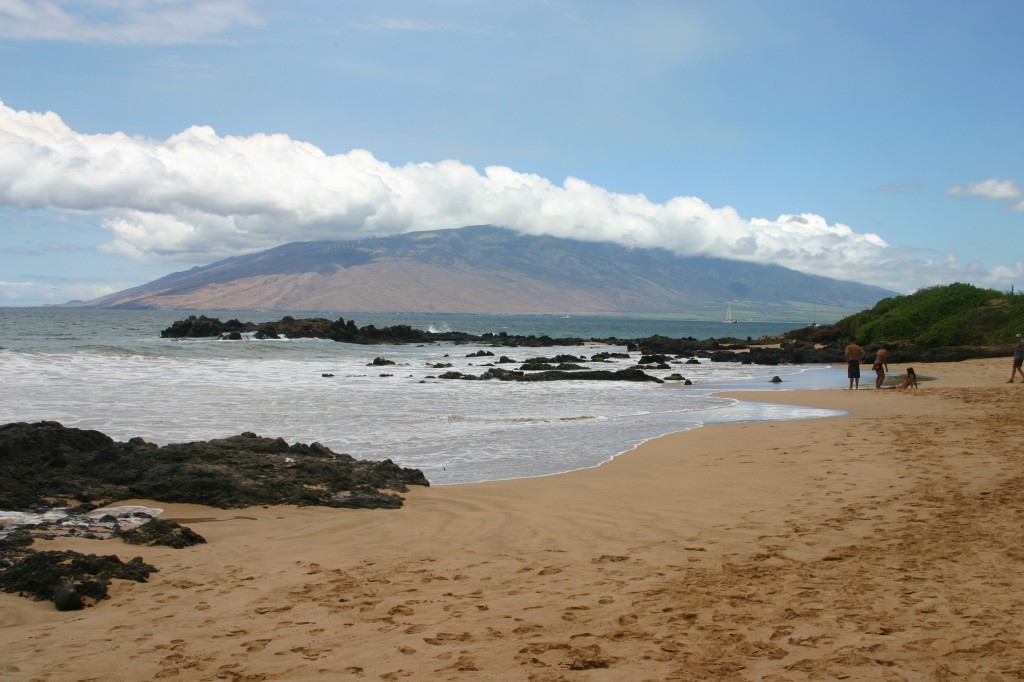 DETAILS:
Kama’ole Beach Park is a set of three popular stretches of beach smack in the middle of Kihei. Frequently called by their shortened nicknames (“Kam I”, “Kam II” and “Kam III”) they are all well marked, easy to find, and right on South Kihei Rd.

Besides being in the middle of the action, these beaches are very popular due to an unbeatable combination of accessibility, facilities, and just plain old really nice beaches!

Normally the ocean at these beaches is relatively safe for swimmers, although it should be noted that the ocean does drop to overhead levels relatively close to shore. Also during Kona storms and south swells, the surf can get big, rip currents form, and swimming can become dangerous.  (see Ocean Conditions.)

The boundaries of the three beaches are delineated by rocky points at either end of the beach. If you like to take long beach walks or run, you can start at either end of Kama’ole and walk all the way to the other rather easily – you will probably want to cut across the small stretch of Royal Mauian “ocean-front lawn” between Kam I & II (where scrambling over the rocks is a bit more difficult.) There are small, vaguely worded signs indicating a public access exists through there, but it is not clear precisely where (likely because much more of this manicured lawn is actually public beach than they would like to admit!)

The area at the North end of Kam I (which is called “Charley Young Beach” by locals) is the best area for snorkeling. Snorkeling is also pretty good at all of these beaches. Stick around the rocky points for the best snorkeling. 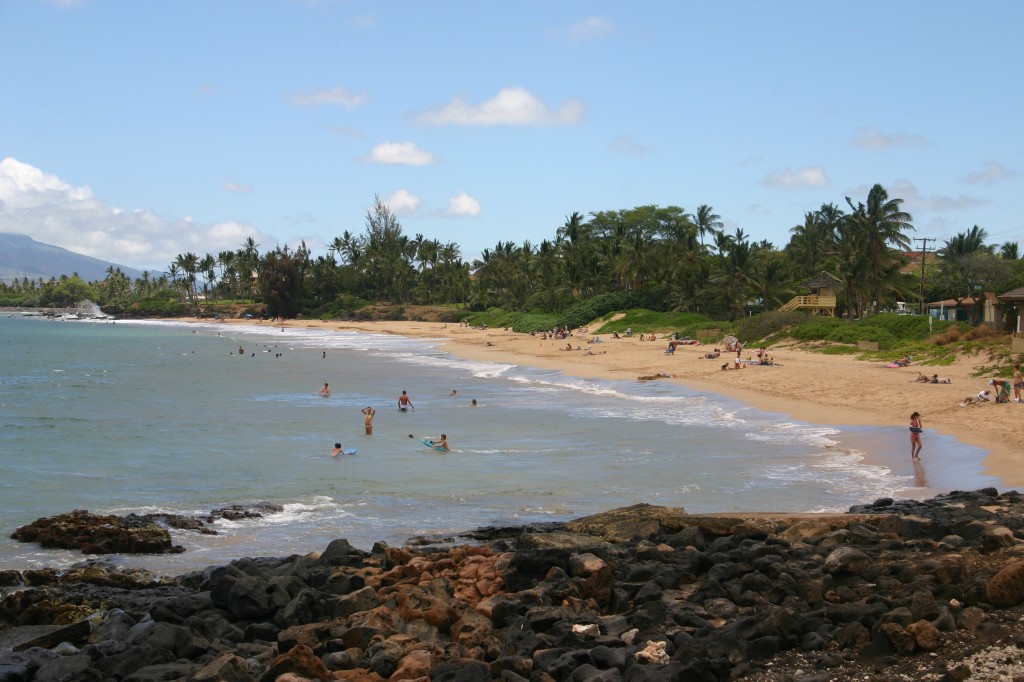 Kama’ole I & Charley Young Beach
A wide, sandy beach, with good swimming. The north end of this stretch of beach is called “Charley Young Beach.” Charley Young was a military reporter who came at the wrong time to build his house here – during WWII all these beaches were taken over and made to simulate enemy beach landings. Anyway, Charley got his land back after the war, and built his house.

Parking for the rest of Kam I is at the main parking area right in front of the beach, on street, and at an overflow lot across the road. (see Google map below for all Kam parking lots.) 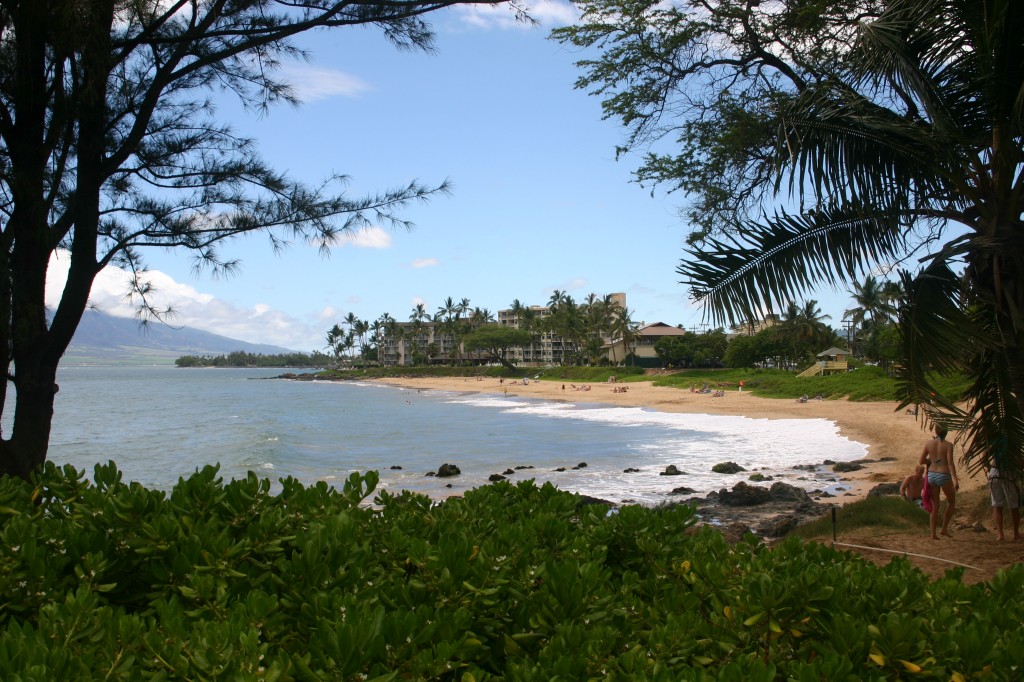 Kamaole II with the Maui Banyan condo in background

Kama’ole II
Another fairly wide sandy beach, the Maui Banyan sits on the end of this beach. While they like to tout it as “one of the finest beaches on Maui”, that claim is a bit exaggerated. What they don’t share in the glossy literature is that after large Kona storms, the sand can temporarily be removed by the ocean leaving rounded lava rock (resembling river rocks, except black.) In fact, the old-time Hawai’ian name for this beach (you know, from the folks that weren’t trying to sell you a condo) is “Ili’iliholo”, which literally means “running pebbles.” (Salesman bashing aside, most days of the year this is still a pretty nice beach!) 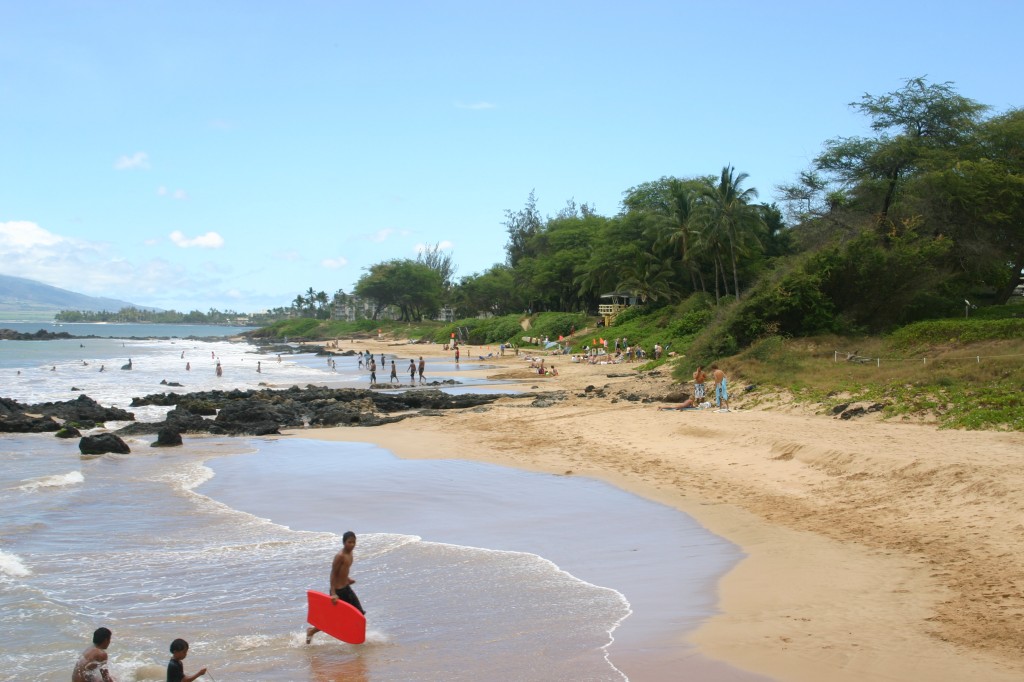 Kamaole III with Ana'iao in the foreground

Kama’ole III
Kam III is the most popular of the three beaches. It is also the best for boogie-boarding, with a regular break here that can get fairly large during south swells. It is shortest and least wide of the Kama’oles, but it does have the most facilities and a gigantic grassy park area. It also has a new playground and bathroom, and plenty of parking (But weekends & holidays are very popular here – so you will probably need to park in the overflow parking lot.)

Be aware that some Large rocks are found protruding from the ocean (and less so, the sand) along some pockets of Kam III. There is also a second rock-bracketed area that forms a more protected cove at the south end Kam III, the cove is called Ana’iao by old-timers. (You’ll likely be the only person there that knows that name!)