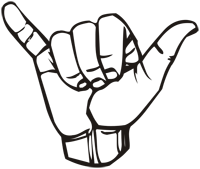 The shaka is a friendly gesture of Aloha. It can be applied in place of “hello”, “goodbye”, “thank you”, “howzit”, and us used universally in many more applications.

The origin of the shaka is uncertain, but my favorite legend follows. According to to a Honolulu Star-Bulletin article in 2002:

…the prevailing local lore is that it originated with Hamana Kalili of Laie, who lost the middle three fingers on his right hand during an accident at the old Kahuku Sugar Mill.

Kalili’s grandnephew Vonn Logan, who works for Brigham Young University-Hawaii’s Department of Continuing Education, explained that Kalili’s job was to feed sugar cane into the rollers, which would squeeze out the juice. He lost his fingers when his hand got caught in the rollers, Logan said. Because he could no longer work in the mill, he became a security guard on the sugar train that used to travel between Sunset Beach and Kaaawa.

“One of his jobs was to keep all the kids off the train,” Logan said. “All the kids would try to jump the train to ride from town to town. So they started signaling each other. Since (Kalili) lost his fingers, the perfect signal was what we have now as the ‘shaka sign.’ That’s how you signaled the way was clear.