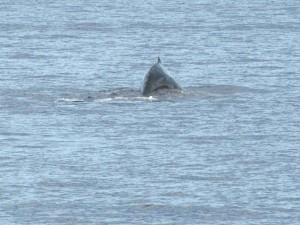 MA’ALAEA (MAUI),HI (October 20, 2010) — The humpback whales are back in Maui County waters! Maui’s first reported humpback whale sighting of the season took place today about two nautical miles off Ukumehame (located between Ma’alaea and Lahaina). The whale was a lone subadult.

Following up on a call from Captain Chris Howard of the Alii Nui, Pacific Whale Foundation’s vessel Ocean Explorer was able to locate and view the whale at 11:15:37 a.m. According to Captain Tiffany Thomas, the whale was milling at the surface, with average downtimes of 10 to 15 minutes.

Pacific Whale Foundation’s vessel Ocean Quest was also able to observe the whale at 12:45 p.m. at the same location. The whale was still milling at the surface, and not moving in any particular direction. Passenger Gary Erbeck from San Diego, CA was able to photograph the whale. (See photos at right.)

“October is the time we expect to see the whales,” he notes. “We have records dating back to 1998, which show that 9 of the 13 first reported sightings took place in October; the others were in late September or early November.”

“Needless to say, we’re all thrilled that the whales are back,” he notes. “We’ve missed them all summer.”

Kaufman explained that the first sightings are often subadult whales. “Subadults are whales that have not yet reached adulthood and sexual maturity; they appear first, along with mothers and their yearling calves,” he notes. “Mature males and females arrive later, followed by pregnant females.”

The humpback whales that migrate to Hawaii are part of the North Pacific humpback whale population. During the summer, Hawaii’s whales feed in nearshore waters along the west coast of North America near Alaska. Seasonal cues may trigger their migration to warm water breeding areas. An estimated 10,000 to 12,000 whales are believed to swim to Hawaii each year, a distance of about 2,500 to 3,000 miles.

While in Hawaii, the whales mate and give birth. Hawaii is the nation’s primary mating and calving grounds for the endangered humpback whale and is home to the Hawaiian Islands Humpback Whale National Marine Sanctuary.

The whales don’t arrive at once and many don’t spend the entire time here; instead they flow in and out of Hawaii’s waters throughout the winter. The largest numbers of whale sightings occur during February and March. A recent scientific paper published by Pacific Whale Foundation showed that a male humpback whale was sighted in both Hawaii and Mexico during the same winter season.

The population of North Pacific humpback whales is thought to be increasing at a rate of 5% to 7% each year. Humpback whales are listed as endangered under the U.S. Endangered Species Act.

You can get updates on whale sightings throughout the fall and winter at Pacific Whale Foundation’s Facebook page at  https://www.facebook.com/pages/Pacific-Whale-Foundation/109925212362570

Upcoming Whale Events
Starting on November 8, Pacific Whale Foundation will offer two-hour whale search cruises. Guests learn about whales and may catch views of early season whales. The price is $ 24.95 for adults. Children ages 6 and under go free. Guests can save 10% by booking online at www.pacificwhale.org.

About Pacific Whale Foundation:
Founded in 1980, Pacific Whale Foundation is a nonprofit organization dedicated to promoting appreciation, understanding and protection of whales, dolphins, coral reefs and our planet’s oceans. We accomplish this by educating the public — from a scientific perspective — about the marine environment. We support and conduct responsible marine research and address marine conservation issues in Hawaii and the Pacific. Through educational ecotours, we model and promote sound ecotourism practices and responsible wildlife watching. To learn more, visit www.pacificwhale.org.