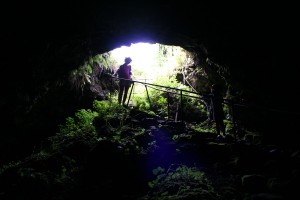 In a nutshell: An interesting lava tube (cave) where you can explore about 1/3 mile of unusual underground formations.
Minuses: Exploration officially restricted to the 1/3 mile portion under the property (the tube is much larger.)
Sound-bite: “Lavacicles!”

Ka’eleku Cave is a cool, dark change of pace from the typical Road to Hana trip. This is the largest and most accessible lava tube in Maui, and also has many interesting features making it a must-see for those interested in caves and geology. Kids also love it, and the majority of the cave is large enough that even claustrophobics won’t have any issues.

Lava tubes are formed when massive flows cool on the surface forming an insulating conduit for the lava flowing underneath. During the creation of Maui’s volcanic landscape these served like the veins of the volcano, channeling lava for many miles underground before being deposited as new landmass (in this case, into the ocean.) After a volcano has been dormant for some time, these tubes usually begin to cave in and disappear under the forces of nature. Since much of the surface of Maui formed long ago, we have few lava tubes of significant size remaining; Ka’eleku Cave is the largest known accessible lava tube on Maui. 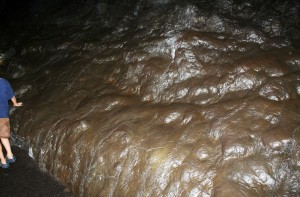 Various forms of lavacicles (yes, that’s a real word!), stalactites, fissures, cracks, skylites and a cold-war era fallout shelter are some of the things you’ll see here. Other features include a chocolaty-good portion that looks like you’ve transported to Candyland. Lava surfaces formed to resemble huge mounds of flowing chocolate, alongside complimentary dripping “chocolate kisses” on the ceilings. Other notable features are the “Bowling Alley”, where Flintstone-era gutters run down the sides of the “alley” beneath your feet. My kids didn’t know what they loved most – excitedly rushing from one place to the next – but they especially enjoyed the “claustrophobia check” at the end of the official tour portion – I can attest that they all passed with flying colors (but mom & dad had an attack just watching them squeeze in one after another!)

Entry to the cave is a reasonable $12, which includes a short orientation and use of powerful flashlights (hardhats are also available for OSHA fans!) Kids under 5 are free, and if you’re going in alone, you’ll be given two flashlights (shut off your lights when you’re inside to see why that’s such a good idea…) 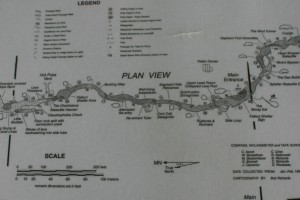 The cave is fitted with handrails and plenty of informative signage throughout. There is also a relatively smooth cinder trail through the tour portion of the cave that makes walking through a simple and safe task for most anyone in half-decent shape.

The ends of the tour portion of the caves are clearly marked not to venture beyond (but that doesn’t always stop the more adventurous from exploring a bit more.) Exploration beyond the limits may be trespassing depending on where you might stray, and is certainly rougher, less safe, and explicitly advised against by the owner. Oh, and if you find what looks like bones, they probably are – this cave was used by cattle ranchers to dispose of slaughtered cattle remains for many years – the owner backbreakingly hauled the majority out, but nothing escapes the sights of adventurous kids and ours managed to rustle up a cow tooth on their rounds of the cave. 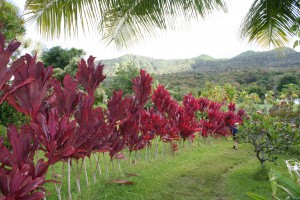 The ti maze has a stunning backdrop!

Outside the entrance to the cave is a ti maze (think of a hedge maze or maize maze, but with ti plants – same idea.) The ti maze is an interesting concept, using locally significant plants. It is far from easy (unless you cheat!) and the maze is free with your cave admission. Unfortunately the ti doesn’t make solid walls, so you don’t get the same effect as when you’re actually being visually hemmed in.