EMI leases much of the watershed in East Maui, they have been around forever, and control much of the surface water.

In a nutshell: EMI is the water company (for agricultural and rural customers.) EMI leases much of the watershed in East Maui, they have been around forever, and control much of the surface water.
Minuses: EMI places signage at entry points to many public lands to which it may not actually have rights to control beyond its infrastructure. Farmers and environmentalists claim EMI dumps excess water it doesn’t use, and that streams beyond the diversion points are no longer healthy as a result of diverting too much water.
Sound-bite: “How do I know the difference between EMI owned, and State owned lands?”

Please be aware of unsafe high water or flash-flooding that can occur in North and East Maui streams. This note is found on many articles, if you have not read the flash flood page, taking a minute to do so could save your life.

DETAILS:
Portions of many nature hikes in North and East Maui cross or are directly on EMI easements leased from the government:

East Maui Irrigation Co. Ltd., one of the oldest subsidiaries of Alexander and Baldwin, Inc. and has land holdings in the heart of East Maui Watershed. Like all the partners, EMI is concerned about protection of the rainforest.

EMI supplies water from the East Maui Watershed to the County of Maui Department of Water Supply for Upcountry domestic and agricultural consumers and Hawaiian Commercial & Sugar Company for sugar cane cultivation on 37,000 acres. It began in 1876 when construction started on the Hamakua ditch, built by Hawaiian sugar pioneers Samuel T. Alexander and Henry P. Baldwin. Today, EMI encompasses 74 miles of ditch and tunnels, numerous pipes and flumes, capable of collecting and transporting 450 million gallons per day. EMI also maintains 7 reservoirs that hold up to 274 million gallons. (source: EMI)

EMI owns the ditch system that diverts water from State-owned watershed land in North and East Maui, operating under original water leases issued by the government of the time (prior to Hawai’i statehood.) Since the expiration of the original leases has long passed, various entities of the State of Hawai’i have issued year-to-year revocable permits for EMI to continue operating the ditch system on State land. 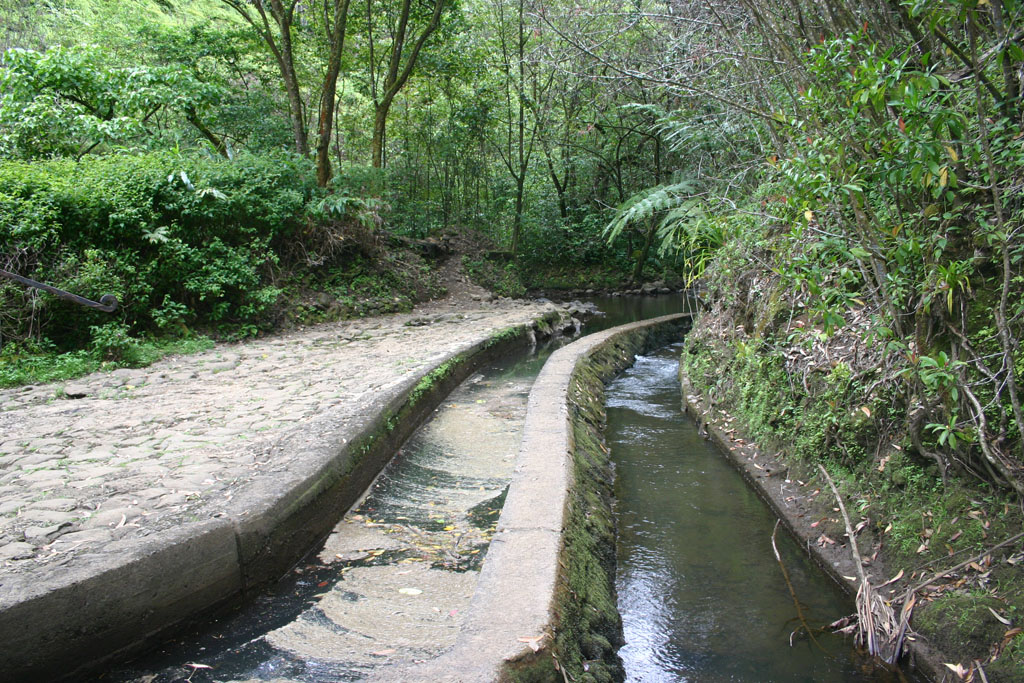 History & Politics
There are legal battles over these permits, including between EMI and Native Hawai’ians, Taro growers, farmers and naturalists who have observed that much of this water, water they would like to be restored to the natural stream flow, is still being diverted long after the sugar industry has become a shadow of its former self. Some of these groups argue that the water is being dumped in an effort to retain control and claim rights to the principal source of water on Maui for future development.

There is no argument that significant power that comes with control of the water on our island; people wait years to get hooked up, and obtaining a water meter to your property increases the value of your land by six-figures. Also, the Iao aquifer where the County of Maui gets much of its domestic water, is currently being tapped at a rate faster than recharge – a rate which the State has mandated must be decreased. To meet this requirement and an ever increasing demand for water, Maui county purchases more and more water every year from EMI to supliment the domestic water system – the same water that already belongs to the people of Maui prior to entering the ditch system.

Trespassing or Not?
Regardless of the history lesson, and the politics of water on an island, the truth is that EMI’s “No Trespassing” Signs have historically been ignored (by locals and visitors alike) for many years. In fact, the most common print guidebook for Maui all but instructs visitors to simply ignore the signs and strongly insinuates that there is no real enforcement to fear (which has been true.) There is also some ambiguity as to where EMI has the right to restrict access. Clearly EMI can restrict access to assets they own, such as structures and the ditch system. However, the streams, pools, the water itself, and most of the land, belong to the public, and may not be within EMI’s rights to control. Add to that the complexities of legal easements where public access has gone on trails for long periods of time, and where the line is between your right to access a trail and trespassing is a very grey area.

So, should you just ignore the signs or feel free to proceed where signs are not present? I can’t tell you the answer to that! What I can tell you is that the EMI ditch system predates the modern era of worker and public safety and you could very easily become injured or killed making decisions to cross high viaducts, bridges or accessing any part of the ditch system infrastructure. Tragically, people drown, including fairly recently two young girls who were rafting on inner tubes in the ditch. I can tell you personally, that loss and grief was felt by our entire close-knit North Shore community. 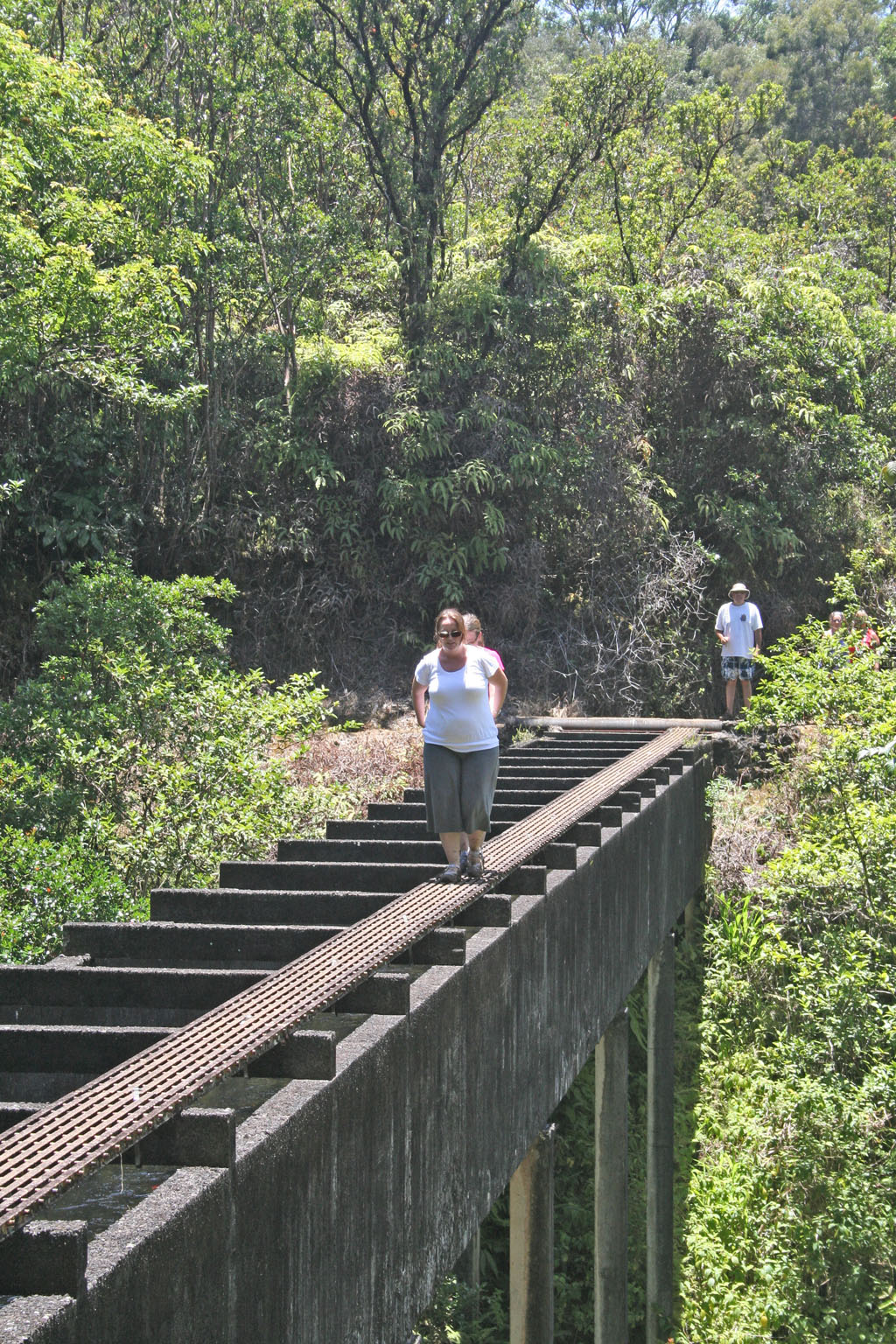 Noooooo! Don’t do this!

Besides the risk to life, most of the system infrastructure is EMI property, and they do not want you on it. I think it is very similar to the railroad system on the mainland – infrastructure that cuts across vast areas of land, that is dangerous, but that can not be completely avoided. How would you feel about following along or crossing railroad tracks on a hike? Would you climb the towers and mess with the equipment? Would it be OK if you followed walking directly on the tracks or across railroad bridges? These are questions that you need to be comfortable with yourself – because there are significant safety risks, and the owner of either of these kinds of infrastructure do not not want any liability from people using it for purposes for which it was not intended.

As far as the state reserve land goes – I’m not a lawyer, and can’t speak for where the specific lines of these laws are drawn. I can say, for all practical purposes, neither the State nor EMI have had any visible enforcement efforts to restrict access to my knowledge.

EMI Wavers
Now, if you’re the kind to not take the chance of unintentionally breaking the letter of trespass law, EMI does actually permit hunters and hikers access, so long as they have signed waiver releases and obtained permission prior.

EMI will allow some to hike across certain sections of the leased land so long as each hiker has a waiver, carrying it with them during the hike. An EMI WAIVER IS ABSOLUTELY REQUIRED. Call in your waiver request to Jackie at 579-9516 well in advance [5 days prior] and MAKE an appointment – at a time that is convenient for her – then go by the office to sign the waiver and get your copy. The Pa’ia office is at 497 Baldwin Avenue.
There are Sierra Club hike leaders who can serve as safety and informed local access guides. Connecting with the Sierra Club may be the best, safest and most respectful way to handle hikes through areas such as this.

Perhaps the single best advice I can offer is this: Be safe. Know your limitations. Understand the risks, and don’t be lulled into a false sense safety by the spectacular beauty of Maui.