Molokini is a world-class snorkel and diving destination with exceptional water clarity and marine diversity.

In a nutshell: Molokini is a world-class snorkel and diving destination with exceptional water clarity and marine diversity.
Minuses: It is usually very crowded.
Sound-bite: “Hey, I wonder what is on the other side?”

DETAILS:
Molokini Crater is a highly popular snorkel and diving destination. Home to hundreds of species of fish and coral (some found nowhere else but Hawai’i), and near perfect visibility, Molokini deserves the attention it attracts.

One of the reasons Molokini is so incredibly popular is the wide range of snorkeling and diving abilities it satisfies. From first-time snorkelers, to expert, highly experienced divers – Molokini has places for all of them. Intermediate and beginner divers can dive in many locations within the crater basin – all with varying levels of skill required. The back side of the crater is left to more advanced divers, and consists of ledges and walls descending over 200′.

Why is Molokini a Crescent?

Many guidebooks (including the most popular one) incorrectly attribute Molokini’s crescent shape to wave action – however, those familiar with the ocean here might notice a big problem with that theory: The side that takes the brunt of the relentless pounding is the same side that’s still standing!

Getting There
Boats typically leave from Ma’alaia Harbor, or Kihei boat ramp. Rough seas and wind (more likely later in the day) cancel trips often enough that you should know that going in. Wind and waves are usually calmer earlier in the day, and the fish are also more active at that time.

Most will find the boat ride enjoyable, and if you pay attention to the water, you have a good chance to see larger marine life on the way. During the height of whale season (December-April) you’re also practically guaranteed to spot whales if you’re looking (and maybe even if you’re not!)

Tip: Leave from Maalaea Harbor, Boats from Lahaina are much longer rides, and can be rougher on the return. If you are subject to sea sickness, a bigger boat is a good choice. 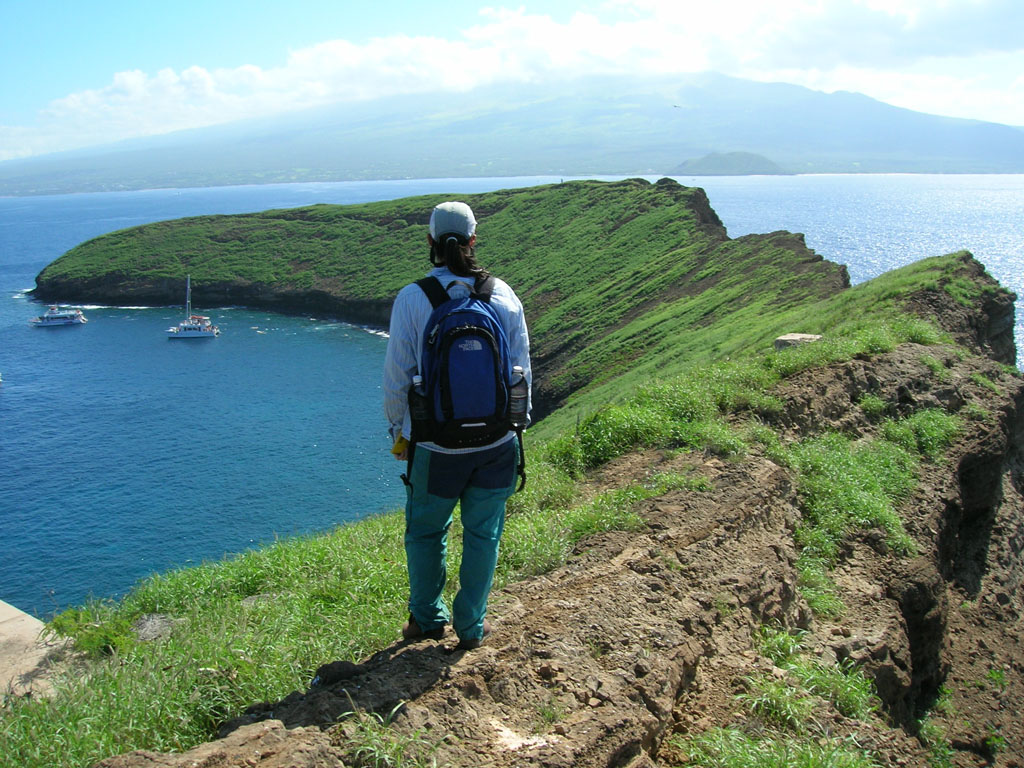 A rare view: photo of botanist Kim Starr on Molokini. Kim and her husband Forest are well-known among Hawaii naturalists, botanists and geologists for their work photographing, cataloging & identifying threatened and invasive species. (Photo: Forest and Kim Starr)

Geography
The Molokini Islet lies in the Alalakeiki Channel between South Maui & Kaho’olawe. Formed by a volcanic activity about 200,000 years ago, Molokini formed in a lop-sided manner. Since this crater lacks a northern wall, the crescent-shaped southern side conveniently blocks the majority of the wave action, while the crater basin opens to the ocean. A large, protected reef with calm water is the perfect shelter for abundant marine life and world-renowned snorkeling and diving.

Note: Alalakeiki Channel has strong currents. So even though it may look close, don’t try and kayak here without appropriate knowledge and skill.

Once I was on a charter to Molokini and against warnings from the crew, a passenger decided to go for a swim around the point of the crater. Well, that wasn’t smart. The boat wound up having to go pick him up because he couldn’t escape the current. This guy was really lucky all that happened to him was a bunch of stink-eye from the crew and other passengers – the currents are notoriously strong in this part of the channel, and outside the protective shield of Molokini, an inexperienced swimmer has little chance of going anywhere the current doesn’t want him to go.

The waters around Molokini are designated as a Marine Life Conservation District, protecting 260 fish species and 38 coral species. The land itself is also a State bird sanctuary – and due to the sensitive (and small) habitat, visitors are not permitted on land. (Nevermind the potential of crossing paths with some unexploded ordinance…oh, did the glossy snorkel-boat brochure forget to mention that?)

Starting in WWII, and continuing for a time after, not unlike Kaho’olawe, her closest neighbor to the West, the US military used Molokini as a bombing target. Impact craters, shell fragments, and spent casings have been found on the island and in the surrounding waters.

Hawaiian mythology holds that Molokini was formed when both the Goddess Pele and her rival, a mo’o (gecko) fell in love with the same prince. Pele cut her rival in two, turned her to stone, and threw her into the ocean. Molokini is said to be the lizard’s tail, and Pu’u Ola’i, her head.